I Will Have At Thee With Mine Index Finger! Or, Two Thumbs Good

Not for the first time, I did a double take during a lesson today. Out of the corner of my eye, I thought one student was texting. During an AS Physics lesson? Shameful! This behaviour cannot and must not be tolerated!

But she wasn’t texting at all. She was actually using her scientific calculator to solve projectile problems exactly as I’d asked her to do — but using her thumbs to press the keys rather than her fingers. And she was holding the calculator in exactly the way she would hold a smartphone when texting.

Possibly this seems unremarkable to you. I guess it depends on your generation. It seems remarkable to me. Let me explain why. 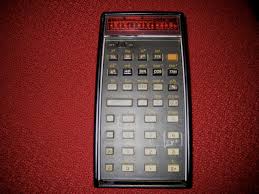 Similar to my first calculator, but ours had even more keys.

I still remember the first scientific calculator that entered my parents’ house. It was a hulking unwieldy thing with a primitive red LED display that completely drained a 9V battery after barely an hour of use; it also had what seemed like a button for each and every function (e.g. a separate button for both sine and inverse sine), since the SHIFT key had yet to be invented. It was still hailed as a liberator, since it freed me from the tedium of looking up values in printed, mark you, printed log and sine tables.

The calculator was placed flat on the table, or held in my left hand, and the keys pressed using my right index finger. It’s the way I still use a calculator today.

Not so the young folks of today. They have been raised from birth using a variety of teeny tiny little keyboards. I don’t know if it was a lone, unsung genius who figured out that holding a touch screen keypad firmly in both hands and operating the keys using two thumbs was preferable to the I-shall-stab-at-thee-with-mine-index-finger method, or whether it hailed from the mind of Steve Jobs or his minions, but the technique has conquered the world.

Even I use it with my phone these days, although at such a slow, cack-handed pace that it makes any teenagers in the vicinity wince with frustration.

And why do I think that this is worth commenting on? Because this is an example of a real live copper-bottomed twenty-first century skill. It is an efficient, effective way of interacting with mobile electronic technology

You know the “Shift Happens“* brigade, those folks who say that the current education system is not teaching the skills necessary for the world of tomorrow?

Well, taught or not, it seems that some of the “skills of tomorrow” are developing apace. And I think that it is a skill that could not have been anticipated by any futurologist. It developed to meet a need to input data quickly and accurately on a mobile device.

But you know what has not changed for the student I mentioned above? The mathematical knowledge required to press the number and function keys in the correct sequence. I may not have taught my students the “two thumbs” input technique, but at least I taught them the mathematical foundations required to use a calculator to solve Physics problems. The other stuff they were able to teach themselves. (Good thing too, because I don’t think I could.)

I feel that examples like this quite take the wind out of the sails of those who claim that traditional teaching is too “old hat” to be taken seriously: it’s the traditional skills that provide the footing for the new skills. I think that we ignore that truth at our peril.

The fact is that human beings have adapted successfully to many novel changes in the past. The likelihood is that we will continue to do so, albeit in ways that may well be surprising and unexpected. But the point is, we generally build on or adapt things which have worked in the past. Evolution rather than revolution if you will.

I think that too many people have claimed oracular powers to see into the future and thus justify the revolutionary changes they wish to make to the education system. Frequently these appeals sound plausible and have emotional power, with phrases like flexibility and creativity and breaking the factory model, but as Tom Bennett points out in Chapter 9 of his excellent Teacher Proof, these buzzwords are about as deep and thoughtful as they go. Pragmatic Education also also does a good job of taking down one of these oracles in a recent post.

There is no royal road to educational nirvana, no quick revolutionary fix to make people learn without effort and hard work.

I think that, as Voltaire suggests, we will continue to walk with our feet and talk with our mouths for a long whiles yet. But we may well be typing more with our thumbs…

*The Youtube video that has launched a thousand CPDs