There is little doubt that students find understanding how an electric motor works hard.

What follows is an approach that neatly sidesteps the need for applying Fleming’s Left Hand Rule (FLHR) by using the idea of the catapult field.

The catapult field is a neat bit of Physics pedagogy that appears to have fallen out of favour in recent years for some unknown reason. I hope to rehabilitate and publicise this valuable approach so that more teachers may try out this electromagnetic ‘road less travelled’. 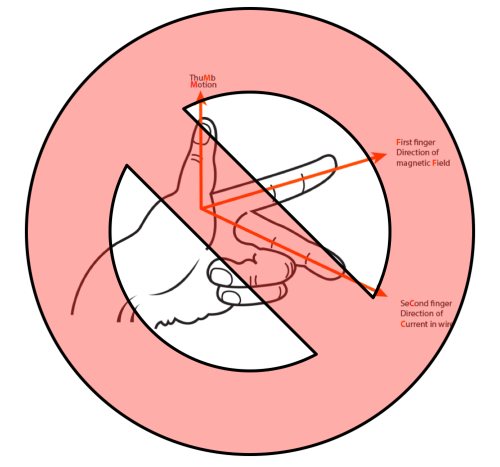 (Incidentally, if you are teaching FLHR, the mnemonic shown above is not the best way to remember it: try using this approach instead.)

The magnetic field produced by a long straight conductor

Moving electric charges produce magnetic fields. When a current flows through a conductor, it produces a magnetic field in the form of a series of cylinders centred on the wire. This is usually shown on a diagram like this:

If we imagine looking down from a point directly above the centre of the conductor (as indicated by the disembodied eye), we would see a plan view like this: 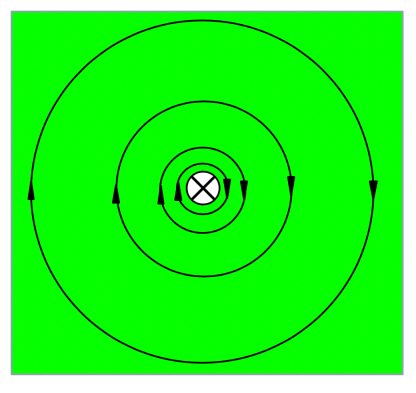 The direction of the magnetic field lines is found by using the right hand grip rule.

The thumb is pointed in the direction of the current. The field lines ‘point’ in the same direction as the fingers on the right hand curl.

Now let’s think about the interaction between the magnetic field of a current carrying conductor and the uniform magnetic field produced by a pair of magnets.

In the diagrams below, I have tried to make the transition between a 3D and a 2D representation explicit, something that as science teachers I think we skip over too quickly — another example of the ‘curse of knowledge’, I believe. 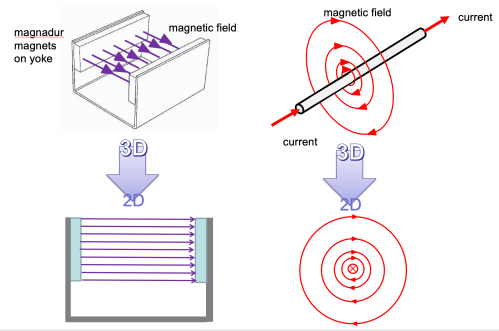 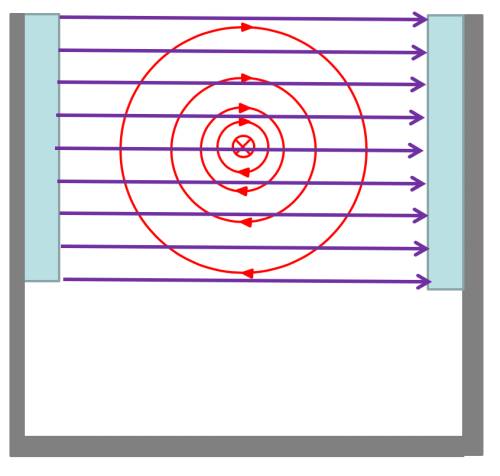 Note that, in the area shaded green, the both sets of magnetic field lines are in the same direction. This leads a to stronger magnetic field here. However, the opposite is true in the region shaded pink, which leads to a weaker magnetic field in this region.

This arrangement of magnetic field lines shown above is unstable and is called a catapult field.

Essentially, the bunched up field lines will push the conductor out of the permanent magnetic field.

If I may wax poetic for a moment: as an oyster will form a opalescent pearl around an irritant, the permanent magnets form a catapult field to expel the symmetry-destroying current-carrying conductor.

Also, the force shown by the green arrow above is in exactly the same direction as the force predicted by Fleming’s Left Hand Rule, but we have established its direction using only the right hand grip rule and a consideration of the interaction between two magnetic field.

The Catapult Field for an electric motor

First, let’s make sure that students can relate the 3D arrangement for an electric motor to a 2D diagram.

The pink highlighted regions show where the field lines due to the current in the conductor (red) are in the opposite direction to the field line produced by the permanent magnet (purple). These regions are where the purple field lines will be weakened, and the clear inference is that the left hand side of the coil will experience an upward force and the right hand side of the coil will experience a downward force. As suggested (perhaps a little fancifully) above, the conductors are being forced into the weakened ‘cracks’ produced in the purple field lines.

The catapult field for the electric motor would look, perhaps, like this:

On a practical teaching note, I wouldn’t advise dispensing with Fleming’s Left Hand Rule altogether, but hopefully the idea of a catapult field adds another string to your pedagogical bow as far as teaching electric motors is concerned (!)

I have certainly found it useful when teaching students who struggle with applying Fleming’s Left Hand Rule, and it is also useful when introducing the Rule to supply an understandable justification why a force is generated by a current in a magnetic field in the first place.

The catapult field is a ‘road less travelled’ in terms of teaching electromagnetism, but I would urge you to try it nonetheless. It may — just may — make all the difference.

2 responses to “Electric Motors Without The Left Hand Rule”