The AQA GCSE Science specification calls for students to understand and apply the concepts of not only thermal energy stores but also internal energy. What follows is my understanding of the distinction between the two, which I hope will be of use to all science teachers.

My own understanding of this topic has undergone some changes thanks to some fascinating (and ongoing) discussions via EduTwitter.

What I suggest is that we look at the phenomena in question through two lenses:

Thermal Energy Through the Macroscopic Lens

The enojis for thermal energy stores (as suggested by the Institute of Physics) look like this (Note: ‘enoji’ = ‘energy’ + ’emoji’; and that the IoP do not use the term): 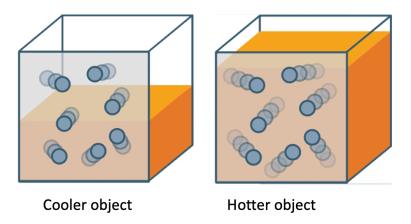 In many ways, they are an excellent representation. Firstly, energy is represented as a “quasi-material entity” in the form of an orange liquid which can be shifted between stores, so the enoji on the left could represent an aluminium block before it is heated, and the one on the right after it is heated. Secondly, it also attempts to make clear that the so-called forms of energy are labels added for human convenience and that energy is the same basic “stuff” whether it is in the thermal energy store or the kinetic energy store. Thirdly, it makes the link between kinetic theory and thermal energy stores explicit: the particles in a hot object are moving faster than the particles in the colder object.

However, I think the third point is not necessarily an advantage as I believe it will muddy the conceptual waters when it comes to talking about internal energy later on.

If I was a graphic designer working for the IoP these are the enojis I would present:

This has the advantage of focusing on the directly observable macroscopic properties of the system and is, I think, broadly in line with the approach suggested by the AQA specification.

Internal Energy Through the Microscopic Lens

Internal energy is the “hidden” energy of an object.

To understand internal energy, we have to look through our microscopic lens.

The Oxford Dictionary of Physics (2015) defines internal energy as:

In other words, we can equate the internal energy to the sum of the kinetic energy of each individual particle added to the sum of the potential energy due to the forces between each particle. In the simple model below, the intermolecular forces between each particle are modelled as springs, so the potential energy can be thought as stretching and squashing the “springs”. (Note: try not to talk about “bonds” in this context as it annoys the hell out of chemists, some of whom have been known to kick like a mule when provoked!) 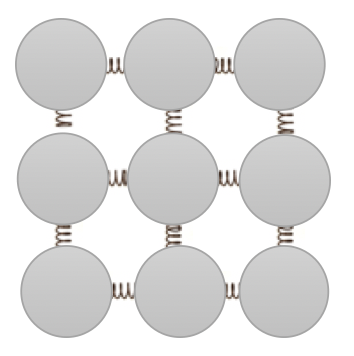 We can never measure or calculate the value of the absolute internal energy of a system in a particular state since energy will be shifting from kinetic energy stores to potential energy stores and vice versa moment-by-moment. What is a useful and significant quantity is the change in the internal energy, particularly when we are considering phase changes such as solid to liquid and so on.

As Rod Nave (2000) points out in his excellent web resource Hyperphysics, what we think of as the thermal energy store of a system (i.e. the sum of the translational kinetic energies of small point-like particles), is often an extremely small part of the total internal energy of the system. 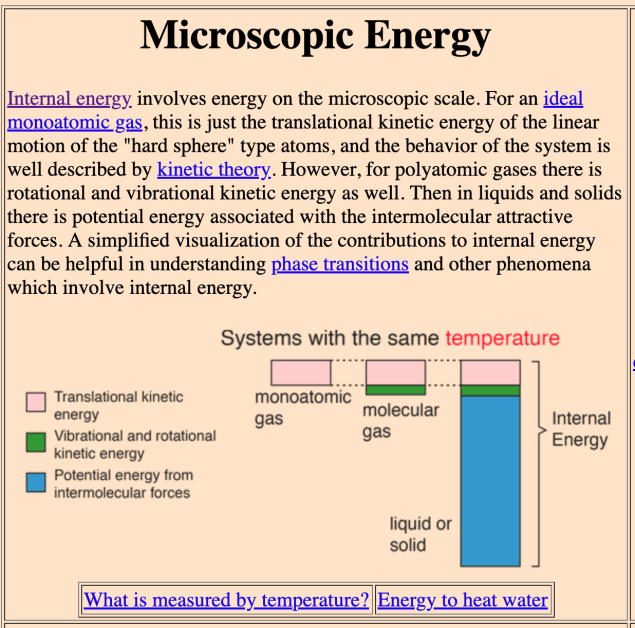 My excellent Edu-tweeting colleague @PhysicsUK has pointed out that there is indeed a discrepancy between the equations presented by AQA in their specification and on the student equation sheet.

@PhysicsUK reports that AQA have ‘fessed up to the mistake and intend to correct it in the near future. Sooner would be better than later, please, AQA!

Main research finding of the first manned Welsh mission to the Moon, as reported by Max Boyce c. 1974.

A Brief History of F=ma

When writing A Brief History Of Time, it is said that a literary agent warned Stephen Hawking that each mathematical equation that he included in the final draft would halve its eventual sales.

And one of the complex equations that Hawking wished to include? A summary of Newton’s 2nd Law: F=ma.

In other words, the force F acting on an object is equal to the mass m of the object multiplied by the acceleration experienced by the object.

(In the end, Hawking opted to include only Einstein’s E=mc2 in what turned out to be the ultra bestselling A Brief History of Time.)

The gist of his argument (and it’s a hard argument to counter) is that F=d(mv)/dt is a far better expression of the law than the F=ma version because it covers a wider range of circumstances.

This is the version of N2 stated in most dictionaries of Physics. For example, the Oxford Dictionary of Physics (2015) p. 383.

The argument suggests that, just like V=IR is not a statement of Ohm’s Law unless R has a fixed value (like a fixed length of wire at a constant temperature), F=ma is not a sufficient statement of N2 unless the mass m is constant.

For example, if we consider a rocket capable of producing a steady 1000 N of thrust; at t=0 its mass is (say) 10 kg so its acceleration is 100 m/s2. However at t=1 s its mass has decreased by 1 kg so the acceleration is now 111 m/s2 even though the thrust is still 1000 N so obviously F is not proportional to m so F does not equal ma in this situation.

Feynman as the new Aristotle

Richard Feynman (1965) wrote along similar lines in his justly famous Lectures on Physics:

Thus at the beginning we take several things for granted. First, that the mass of an object is constant; it isn’t really, but we shall start out with the Newtonian approximation that mass is constant, the same all the time, and that, further, when we put two objects together, their masses add. These ideas were of course implied by Newton when he wrote his equation, for otherwise it is meaningless. For example, suppose the mass varied inversely as the velocity; then the momentum would never change in any circumstance, so the law means nothing unless you know how the mass changes with velocity. At first we say, it does not change.

However, I think Feynman is considerably oversimplifying what Newton said here. Dare one suppose that Feynman, who had an enviable natural facility for talking intelligently and arrestingly about nearly any subject under the Sun, had perhaps skimped a little on his background reading?

Incidentally, does anyone think that physicists (especially physics educators — myself included) are beginning to treat Feynman as the medieval scholastics are reputed to have treated Aristotle? That is to say, he is regarded as the final word on everything; or, at least, everything physics-related in the case of Feynman.

What Would Newton Do?

The modern F=ma form of Newton’s second law nowhere occurs in any edition of the Principia [ . . . ] Instead, it has the following formulation in all three editions: A change in motion is proportional to the motive force impressed and takes place along the straight line in which that force is impressed. In the body of the Principia this law is applied both to discrete cases, in which an instantaneous impulse such as from impact is effecting the change in motion, and to continuously acting cases, such as the change in motion in the continuous deceleration of a body moving in a resisting medium. Newton thus appears to have intended his second law to be neutral between discrete forces (that is, what we now call impulses) and continuous forces.

This, I think, supports my contention that F=ma is as good a modern reformulation of Newton’s 2nd Law as any other.

Please note that I would cheerfully concede that F=d(mv)/dt would yield a better and more productive analysis of rocket motion if we are considering the continuous action of the force over time rather than at isolated instants.

The analogy with V=IR is useful here. V is always equal to I times R but V is only directly proportional to I over a continuous range of values of I for a limited set of conductors we call Ohmic conductors whose resistance R is fixed over a range of physical conditions. Likewise, F is always equal to m times a but F is only directly proportional to a for a continuous range of values of a when we are considering a system whose mass is fixed.

Will the Real Second Law Please Stand Up?

Brian Ellis (1965) argues that it partakes of all three:

In some senses, I suppose we might like those unfortunate nations in Gulliver’s Travels who fought a long and bitter war over the question of whether one should eat a boiled egg from the pointed or rounded end:

During the course of these troubles, the emperors of Blefusca … accusing us of making a schism in religion, by offending against a fundamental doctrine of our great prophet Lustrog, in the fifty-fourth chapter of the Blundecral (which is their Alcoran). This, however, is thought to be a mere strain upon the text; for the words are these: ‘that all true believers break their eggs at the convenient end.’ And which is the convenient end, seems, in my humble opinion to be left to every man’s conscience.