To Script Or Not To Script

Many moons ago — when I was younger, fitter and slimmer — I was lucky enough to attend a martial arts seminar with a famous martial arts master. His attitude and practice was anything but the mystical tosh spouted by some of his movie equivalents. Rather, his focus was intensely pragmatic: he had studied martial arts all over the world in order to find out what worked. This focus had been started by his early U.S. “police judo” training: if someone comes at you like this then you try this or this or this.

The reason I mention this that many teachers seem to hate the idea of a scripted lesson. To my mind, a scripted lesson doesn’t necessarily entail a series of reductive, robotic responses. Instead, it could simply be a list of suggested sequences and interactions that have been found to work historically.

I often — perhaps too often — write and use my own resources (“Use another teacher’s resources? Ugh! I’d rather use their toothbrush…! “)
But even I, the king of the animated PowerPoint and the Amadeus of the well-crafted worksheet, would consider using an externally written script if it demonstrably worked.

Whether Direct Instruction scripts really, really work in this sense, I can’t say. The proof of the pudding will be in the eating, or in the teaching.

And, as any actor could tell you, even the simplest script can still leave the actor with a wealth of choices…

They Wouldn’t Let It Lie: The Twelve Physics Pracs of Gove (Part 3) 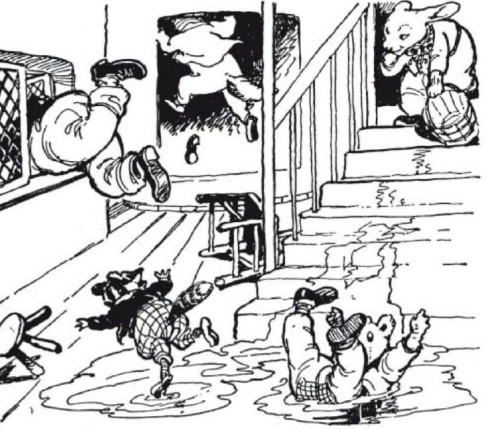 Brer Rabbit was there too, of course, but he said it made his head swim to climb up the scaffold and build like the others, and he said too that he always got sun-stroke if he worked in the sun — but he got a measure, and he stuck a pencil behind his ear, and he went round measuring and marking, measuring and marking. He always looked so busy that all the other creatures said to each other that Brer Rabbit was doing a mighty lot of work.

And folk going along the road said that Brer Rabbit was doing more work than anyone. But really Brer Rabbit wasn’t doing anything much, and he might just as well have been lying by himself in the shade, fast asleep!

Brer Rabbit Gets A House by Enid Blyton

Of all the things that could be dumped overboard during a radical curriculum overhaul, the dreadful, unholy mess known variously as “controlled assessment” or “coursework” or “practical assessment” (but whose names are actually legion) would certainly get my vote.

So, I was actually faintly encouraged by the reformed A-levels insistence that students have to DO twelve “required” practicals, and that all schools have to provide is evidence that their students have DONE those practicals to allow a “practical endorsement” to be ticked on exam certificates. Assessment of students’ practical skills would be in the final examinations.

In my naivety, I thought that a set of properly written laboratory notebooks would be sufficient evidence for the practical endorsement to be awarded. I actually enjoyed explaining the protocols for keeping a lab book to our AS Physics group; for example, the idea that it should be a contemporaneous working document, replete with mistakes and crossings out — proper science in the raw, so to speak, warts and all. And not a suspiciously pristine, antiseptic and bowdlerised “neat” copy. And I thought our students responded gamely to the challenge, even down to worrying whether the pen with erasable ink counted as an ‘indelible pen” or not.

Now, we have to minutely “track” (dread word!) our students’ practical skills, verily even unto recording onto the Holy Spreadsheet if we have indubitable observational evidence of each student reading an Instruction sheet or not.

Oh deary deary me. It calls to mind Wilfred Owen’s memorable lines about being fit to “bear Field-Marshal God’s inspection”.

But it won’t be Field-Marshal God inspecting us. Instead, it will be a vast floppy-eared army of snaggletoothed practical-assessor-Brer Rabbits, hopping all over the land, measuring and marking, marking and measuring…

I give up: this seems to me like defeat, a return to the discredited and unlamented paradigm of controlled assessment. This is defeat, a totally avoidable defeat that has been snatched from the ravening jaws of victory…